Exams are over and more fun adventures can finally get underway! Earlier today I hopped on a plane to the Sunshine Coast to start my relaxing holiday! After several hours on buses, trains, and a plane, I arrived at my hostel in Mooloolaba. The first thing I did was drop off my bags and ask the short walk down to Mooloolaba Beach! I wandered along the Esplanade and sat on the beach for a while, soaking in the sun and enjoying freedom from classes! Well, 3/4 classes - I'm still doing an online class through USF but it's not much work at all! The cute little beachside town of Mooloolaba reminds me of Cocoa Beach! There are nice cafes, lots of friendly people, beautiful stretches of beach, and an overall laid-back vibe. I can't wait to see what the next few days here will hold!

Today I crossed another adventure off of my bucket list- I went whale watching for the first time!! It was a beautifully sunny day and much warmer than Melbourne winter (not that I didn't enjoy the cold because I definitely did!). After a short walk to the wharf, we boarded the boat and headed a few miles out to sea. Since it had been storming for several days before I arrived, there were still some large swells left over. Some waves were so big I was convinced we would get soaked! It was so rocky at points that I was squatting down and squeezing onto the railing to keep from flying into the air! It sounds scary but it was actually a lot of fun!

The crew told us that now is actually a better time than the beginning of the season because the mother whales now have their calves with them. But, because the whale-sighting season is usually over in November, I was a little worried that we wouldn't get a sighting so close to the end. I was definitely wrong! Only a few minutes in we spotted an enormous mom and calf that the crew estimated to be only a few weeks old! They spent awhile resting on the surface before diving down and breaching completely out of the water! Conveniently, my sea-sickness kicked in right then and I missed their first breach but we were lucky enough to see them, and several other pods, breach again. According to the crew, it's rare to see any breaches at all! Then, on the way back in, we passed hundreds of jellyfish (looked like moon jellies) floating along our path!!

Overall, it was an incredible experience and I felt so lucky getting to witness such incredibly beautiful animals in their natural habitat for the first time. I can't wait to do it again!

p.s. The quality of the pictures below aren't great because I had to screenshot them all from videos. Check out my facebook to see the videos!

I FINALLY MADE IT!!!! I have been looking forward to this since I found out I was coming to Australia!!! The day started out great with a free shuttle from my hostel (would've cost about $30 one way for a cab!) where I met Johanna who I would later become good friends with! As soon as I arrived, I went straight to the crocodiles (because how else do you honour the Crocodile Hunter in his own zoo?).Next stop was "Kangaroo Heaven" where I fed and cuddled some of the sweetest roos and wallabies I've seen so far!! Several of them had joeys in their pouches and a few others were so small that they looked like they just popped out!

The Wildlife Warrior show in the famous Crocoseum was at noon and included dingoes, birds, snakes, and of course crocs!! I was pretty devastated that none of the Irwin family was there today to be in the show considering how much I love Bindi but I guess that's just an excuse to go back!! Outside the Crocoseum were hundreds of Steve's family photos and pieces from his adventures on display. It was so cool to feel a like a part of his journey! The tiger show was next where I watched tigers twice the size of me chase a toy up a tree and dive into a pool after a rubber duck!! I can definitely say that I never thought I'd see that!!

After seeing a bunch of other animals, visiting the Wildlife Hospital, aaaaand of course doing some shopping in the gift shop, it was unfortunately time to leave! It was so amazing to see how Steve's legacy has lived on and I know the inspiration of his love for wildlife won't end anytime soon!

Even though I'm travelling alone, I've made some great heres at my hostel here! So today Johanna from Sweden, Carla from Germany, and myself went down to Caloundra for the Sunday Street Fair. We tried dairy-free cheese (made from cashews!), checked out shops and stands of handmade trinkets, and walked along the beach just taking in the fresh air and taking a minute appreciate life!! We later spent the evening on the Mooloolaba esplanade and commented on how nice the weather was today. I included that last part to show the irony in the fact that we got caught in torrential rain an hour later on the way back!!

I have absolutely loved my time here on the Sunshine State and am so glad I made such awesome new friends! On to the next adventure!! 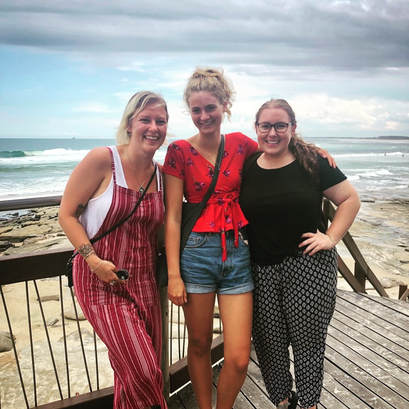