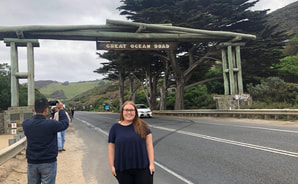 Today was another adventure checked off of my bucket list...Michele and I made a trip down the Great Ocean Road!

The day started very early at just after 5. I would say bright and early except it wasn't bright because the sun wasn't even up yet! But, we had to be in the city to meet up with our tour group by 8! We went with New To Melbourne, the same amazing company I went to the Grampians with a couple weeks ago. First stop was the quaint little town of Anglesea for a break to stretch our legs before heading down the Great Ocean Road. Next was the Memorial Arch that marked the start of the 243-km long stretch of road along the magnificent water. We learned that it took 13 YEARS to build, from 1919 to 1932 as every single piece of the road was carved out of the mountains and cliffs by hand by soldiers who had just returned from WW1. Since it was made to not only connect the isolated cities along the coast but was also a memorial for the soldiers killed in the war, it is the longest war memorial in the world!! You can see a picture of the arch just above. After tons of pictures, we just had to accept the fact that with some many tourists on one side and traffic on the other, there was no way to get a shot without at least one person in the way!

After a bit of driving, we stopped at Kennett River to feed wild parrots and cockatoos. Once we got back on the bus, I learned that I missed seeing a wild koala for the first time because I had wandered off to try to feed a parrot!! No such luck with the parrots but I did get to feed a wild "cocky"!
Next up was Apollo Bay for lunch. Because the restaurant we were supposed to eat at was too packed with all of us and other tour buses, we knew we would barely have time to eat so we wandered off for something else. Michele grabbed an ice cream and I got some fries and we sat in the nearby park along the water for a peaceful snack!

And now, for the most exciting part, and the main reason we went on the tour... the 12 Apostles!! Well, the 7 that are left! The bases of the other 5 have sadly been eroded around by the strong waves over time to the point of them completely collapsing, leaving 7 behind. But, I don't think that took away any of the beauty of it. The second I saw them, it completely took my breath away. It's one thing to see it in pictures but to be standing in front of them, seeing them with your own eyes...there's nothing quite like it. I could've stood there all day... exploring the different paths, walking down to the water, and just staring in awe. A couple minutes down the road was another sight just as impressive- the Loch Ard Gorge. We descended down the stairs onto the sand and were yet again speechless. I found a dry rock to sit on and just gazed out at the view in front me, admiring how beautiful our planet is!!

It was a long drive back into the city and we didn't get back home till almost 11pm! It was a tiring day but so worth it, since neither of us have ever seen the 12 Apostles (even though Michele has lived here for her entire life). I would do the same trip over and over again!
The remaining Apostles 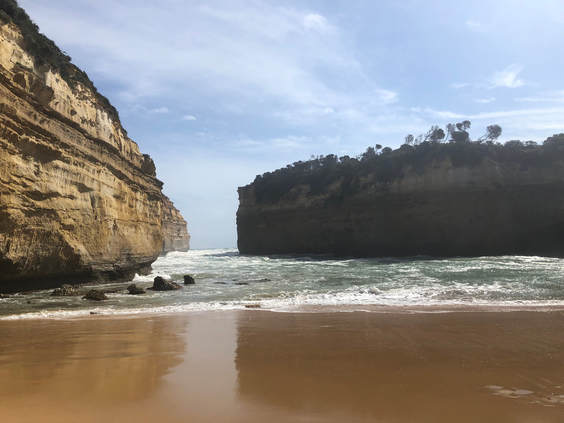